What is a chart of accounts, and why is it important?

What is a chart of accounts, and why is it important?

A general ledger is the foundation of a system used by accountants to store and organize financial data used to create the firm’s financial statements. Transactions are posted to individual sub-ledger accounts, as defined by the company’s chart of accounts. In order to record accounting information by division an additional two digits are used to form a division code.

It provides you with a birds eye view of every area of your business that spends or makes money. The main account types include Revenue, Expenses, Assets, Liabilities, and Equity. There are five main types of accounts in accounting, namely assets, liabilities, equity, revenue and expenses.

A business might for example want to separate its expense accounts by department as demonstrated above, but leave its balance sheet and revenue accounts with the default department code of 00. Suppose our business has two divisions, the semiconductor division and the mobile division, and wants to be able to identify its expenses between the two. All other account types (assets, liabilities, equity, and revenue) are not separated and are to be recorded in a default code referred to as the Head Office division.

The division code is then added to the current five digit code to create a 7 digit chart of accounts numbering system. As a business develops and grows it establishes departments such as, for example, production, design, sales & marketing, and accounting departments.

What numbering system is used for the chart of accounts?

The list of each account a company owns is typically shown in the order the accounts appear in its financial statements. That means that balance sheet accounts, assets, liabilities and shareholders’ equity, are listed first, followed by accounts in the income statement — revenues and expenses.

The general format of the 5 digit chart of accounts numbering system is therefore XX-XXX where the first 2 digits are the department code and the last three digits as before represent the account code. For example by adding the relevant department code to the wages expense account code 620 referred to above, a separate account is created which will identify the wage expense for that specific department. The accounts codes structure seeks to organize the general ledger by grouping similar account types together in ranges. Normally for ease of use the groupings follow the accounts used in a typical balance sheet layout followed by those used in a typical income statement layout.

Most small businesses assign a three- or four-digit number to each account based on the type of transaction that’s involved. At the end of your accounting cycle, the total amount of the individual accounts from each department is totaled and used to generate your financial statements. Debits and credits both increase by $500, and the totals stay in balance. This helps accountants, company management, analysts, investors, and other stakeholders assess the company’s performance on an ongoing basis. Double-entry transactions, called journal entries, are posted in two columns, with debit entries on the left and credit entries on the right, and the total of all debit and credit entries must balance.

In the above table expenses has been allocated the range , so as an example the wages expense might be given the code 620. The three digit chart of accounts numbering system allows for up to 1,000 (0-999) separate general ledger accounts. The IRS requires that businesses use one accounting system and stick to it (see below for an exception). Whether they use the cash or accrual method determines when they report revenue and expenses. General ledger accounts encompass all the transaction data needed to produce the income statement, balance sheet, and other financial reports.

In addition, the operating revenues and operating expenses accounts might be further organized by business function and/or by company divisions. Companies use a chart of accounts (COA) to organize their finances and give interested parties, such as investors and shareholders, a clearer insight into their financial health. Separating expenditures, revenue, assets, and liabilities help to achieve this and ensure that financial statements are in compliance with reporting standards.

Their role is to define how your company’s money is spent or received. Each category can be further broken down into several categories. The 5 digit chart of accounts numbering system allows for up to 100 departments (0-99) each with 1,000 accounts. Of course it is not necessary to divide every account into 100 departments.

The list of each account a company owns is typically shown in the order the accounts appear in its financial statements. That means that balance sheetaccounts, assets, liabilities and shareholders’ equity, are listed first, followed by accounts in theincome statement— revenues and expenses.

How are accounts in the general ledger numbered?

Each general ledger account is assigned a number that can be used by all departments. Individual accounts within each department also are assigned a number. Most small businesses assign a three- or four-digit number to each account based on the type of transaction that’s involved.

Accounting software frequently includes sample charts of accounts for various types of businesses. It is expected that a company will expand and/or modify these sample charts of accounts so that the specific needs of the company are met. Once a business is up and running and transactions are routinely being recorded, the company may add more accounts or delete accounts that are never used.

Accounts are usually listed in order of their appearance in the financial statements, starting with the balance sheet and continuing with the income statement. Thus, the chart of accounts begins with cash, proceeds through liabilities and shareholders’ equity, and then continues with accounts for revenues and then expenses. The exact configuration of the chart of accounts will be based on the needs of the individual business.

A chart of accounts (COA) is an index of all the financial accounts in thegeneral ledgerof a company. In short, it is an organizational tool that provides a digestible breakdown of all the financial transactions that a company conducted during a specific accounting period, broken down into subcategories. It should be noted that the number of accounts expands rapidly when department and division codes are added to the account code.

The two digit division codes allocated are Semiconductor Division 03, and Mobile Division 04 with the default division for all other entries being the Head Office Division 00. Suppose the business has two departments, a production department and a marketing department, and wants to be able to identify its expenses between the two. All other account types (assets, liabilities, equity, and revenue) are not separated and are to be recorded in a default code referred to as the General department.

In the case of certain types of accounting errors, it becomes necessary to go back to the general ledger and dig into the detail of each recorded transaction to locate the issue. At times, this can involve reviewing dozens of journal entries, but it is imperative to maintain reliably error-free and credible company financial statements. Each account in the chart of accounts is typically assigned a name and a unique number by which it can be identified. After recording these transactions, your accountant will make a balance sheet. 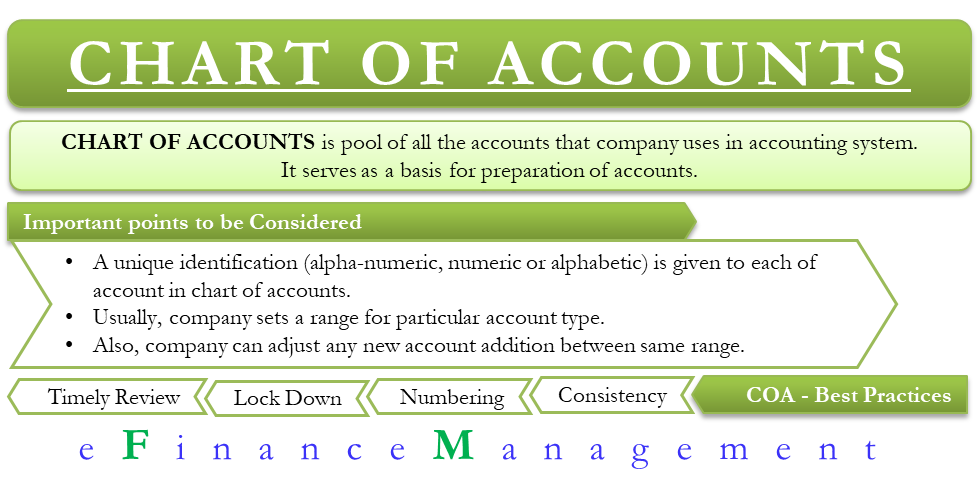 This information will provide a snapshot of what your business owns and owes. It reflects your company’s financial position and offers valuable insights into its overall performance.

Each department will have its own phone expense account, its own salaries expense, etc. We now offer eight Certificates of Achievement for Introductory Accounting and Bookkeeping. The certificates include Debits and Credits, Adjusting Entries, Financial Statements, Balance Sheet, Income Statement, Cash Flow Statement, Working Capital and Liquidity, and Payroll Accounting. Within the accounts of the income statement, revenues and expenses could be broken into operating revenues, operating expenses, non-operating revenues, and non-operating losses.

In order to record accounting information by department a further two digits are used to form a department code. The department code is then added to the current three digit account code to create a 5 digit chart of accounts numbering system. It also involves generating financial statements based on these transactions. All financial statements, such a balance sheet and income statement, must be prepared according to the generally accepting accounting principles (GAAP), according to Accountingverse. A company’s organization chart can serve as the outline for its accounting chart of accounts.