The lessee also posts a lease obligation in the liability section of the balance sheet for the same dollar amount as the asset. Over time, the leased asset is depreciated and the book value declines. A firm must amortize the cost of a capital leased asset over the course of its usable life. To amortize a leased item, the firm must enter the monthly lease payment and the fair market value of the asset into an amortization table. This table is similar to a depreciation table used for assets that are purchased outright, such as real estate.

To qualify as a capital lease, a lease contract must satisfy any of the four criteria. First, the life of the lease must be 75% or greater for the asset’s useful life. Second, the lease must contain a bargain purchase option for a price less than the market value of an asset. Third, the lessee must gain ownership at the end of the lease period. Finally, the present value of lease payments must be greater than 90% of the asset’s market value.

Assuming no modifications in the existing contract, the effect of this treatment would be to amortize the right-of-use asset using the effective interest method, which applies a constant interest rate to an unamortized obligation. Fixed-term (and usually non-cancelable) lease that is similar to a loan agreement for purchase of a capital asset on installments. The lessor’s services are limited to financing the asset, the lessee pays all other costs including insurance, maintenance, and taxes. Capital leases are regarded as essentially-equivalent to a sale by the lessor, and a purchase by the lessee (even though the title remains with the lessor). Therefore, leased assets must be capitalized and shown in the lessee’s balance sheet as a fixed asset with a corresponding non-current liability (lease payable).

How a Capital Lease Works

In essence, a capital lease is considered a purchase of an asset, while an operating lease is handled as a true lease under generally accepted accounting principles (GAAP). In contrast, a capital lease involves the transfer of ownership rights of the asset to the lessee. The lease is considered a loan (debt financing), and interest payments are expensed on the income statement.

Criteria for a capital lease

The lease on a long-term asset is considered a capital lease or operational lease for accounting purposes. With a capital lease, payments are considered both a liability and an asset on the firm’s balance sheet because the business assumes some of the risk of ownership. The firm can deduct capital lease interest expenses on each year’s tax return. 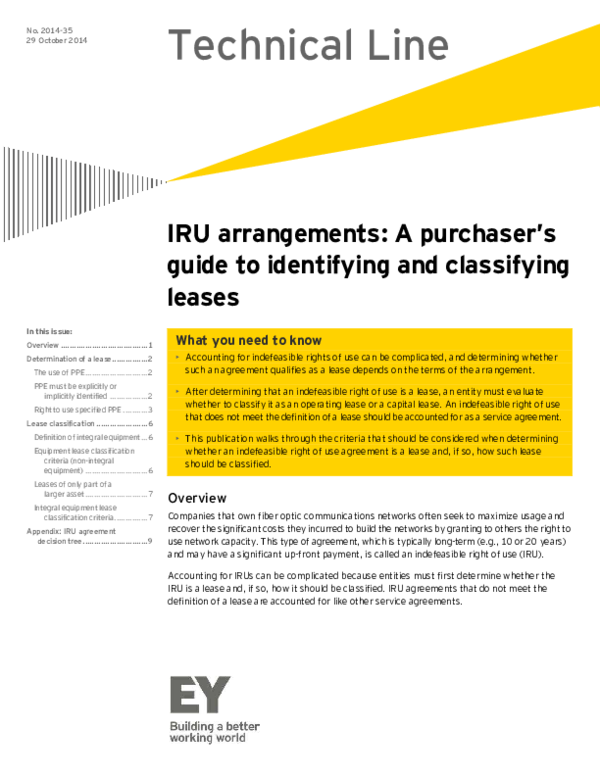 This accounting treatment results in a greater expense in earlier years, followed by a lesser expense in later years. With respect to operating leases, the lessee would classify the annual rental payment as an operating expense on the income statement. Such a simple lease can be complicated by factors such as initial direct costs, lease incentives, and increasing rate lease payments.

A capital lease is an example of accrual accounting’s inclusion of economic events, which requires a company to calculate the present value of an obligation on its financial statements. A capital lease is a lease in which the lessor only finances the leased asset, and all other rights of ownership transfer to the lessee. This results in the recordation of the asset as the lessee’s property in its general ledger, as a fixed asset. The lessee can only record the interest portion of a capital lease payment as expense, as opposed to the amount of the entire lease payment in the case of the more common operating lease.

What is the difference between a capital lease and an operating lease?

If none of the conditions are met, the firm has an operating lease and must treat expenses related to the lease as an operating expense on the income statement. Even though a capital lease is a rental agreement, GAAP views it as a purchase of assets if certain criteria are met. Unlike operating leases that do not affect a company’s balance sheet, capital leases can have an impact on companies’ financial statements, influencing interest expense, depreciation expense, assets, and liabilities. Under the lessee accounting model in previous GAAP, the critical determination was whether a lease was a capital lease or an operating lease because lease assets and lease liabilities were recognized only for capital leases. Topic 842 provides detailed guidance and several examples to illustrate the application of the definition of a lease to assist entities in making this critical determination.

Therefore, the lessee would make the journal entries for year 1 and year 2 shown inExhibit 1. If the contract in the example discussed above is determined not to contain a finance lease, no journal entry shall be made the start of the lease contract.

The lessee acquires all the economic benefits (such as depreciation) and risks (such as the possibility of the loss of the leased asset) of ownership but can claim only the interest-portion (not the entire amount) of the lease payment as an expense. Note that FASB decided to retain the decoupled nature of the right-of-use asset from the related lease liability of a capital lease under the previous guidance in the accounting under the new guidance. As a result, although lessees recognize both operating and finance leases on the balance sheet, the income statement impact of each differs. Absent a more systematic approach, the lessee would be required to amortize the right-of-use asset on a straight-line basis over the lease term, or the estimated useful life of the underlying asset if ownership were transferred to the lessee. In this example, the lessee amortized the right-of-use asset on a straight-line basis while using the required effective interest method to amortize the lease liability. 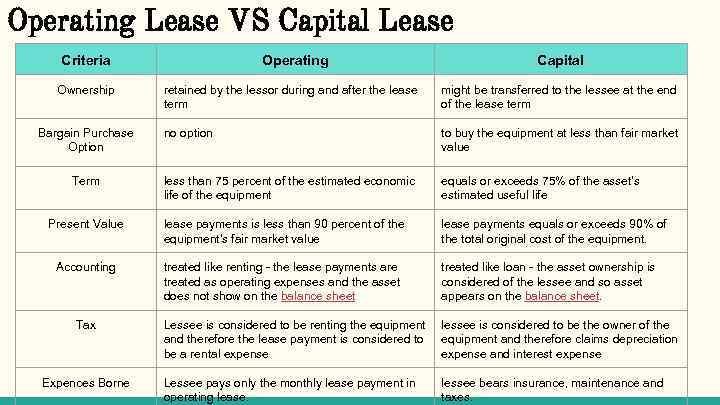 The amortization table will enable the firm to determine the portion of the lease payment that is principal and the portion that is interest. Let’s say that Company A enters into a capital lease contract to lease out an airplane with Company B on January 1, 2018. The agreement is to lease the airplane worth $1,100,000 for a period of 6 years. The contract specifies that lease payment of Rs. 20,000 should be made at the beginning of each month for 6 years. There is no salvage value at the end of the lease period.

The standard provides a number of practical expedients that will allow parties to avoid some of the more challenging areas of implementation. A lessee making this election is required to apply the expedient to an entire class of leases based on the type of underlying asset. A lessor is required to first determine whether a lessee is an operating lease or a finance lease. Only finance leases are required to be capitalized on balance sheet. While an operating lease expenses the lease payments immediately, a capitalized lease delays recognition of the expense.

The Financial Accounting Standards Board has set criteria for treating an operating lease as a capital lease. Although the new standard retains the existing model of having two types of leases, “operating” and “finance,” the lessee’s burden for recognition and measurement is increased. Under the old guidance, operating leases were not recorded on the balance sheet; therefore, many entities did not evaluate leases embedded in service agreements or other short-term leases that were known to be operating leases. A lease must meet one of four criteria to determine if it is a capital or operating lease.

What qualifies as a capital lease?

A capital lease is a lease in which the lessor only finances the leased asset, and all other rights of ownership transfer to the lessee. This results in the recordation of the asset as the lessee’s property in its general ledger, as a fixed asset.

If the expected life of the equipment you are leasing is close to the length of the lease (the asset will last less than 25 percent longer than the lease itself), you have a capital lease and not an operating lease. When a lease is capitalized, the lessee creates an asset account for the leased item, and the asset value on the balance sheet is the lesser of the fair market value or the present value of the lease payments.

The present market value of the asset is included in the balance sheet under the assets side and depreciation is charged on the income statement. On the other side, the loan amount, which is the net present value of all future payments, is included under liabilities.

The measurement of an operating lease is the most significant difference from previous GAAP; the lessee will be required to place all operating leases with a duration of 12 months or more on the balance sheet. These operating leases, which are presented separately from the finance leases, must have right-of-use assets and related lease obligation measured.

To calculate the interest rate on a capital lease, the firm must know several elements, including the total amount financed, the monthly lease payment amount and the term of the lease. The present value of all lease payments is considered to be the cost of the asset, which is recorded as a fixed asset, with an offsetting credit to a capital lease liability account. As each monthly lease payment is made to the lessor, the lessee records a combined reduction in the capital lease liability account and a charge to interest expense. The lessee also records a periodic depreciation charge to gradually reduce the carrying amount of the fixed asset in its accounting records. The capitalized lease method is an accounting approach that posts a company’s lease obligation as an asset on the balance sheet.