The total contribution margin generated by an entity represents the total earnings available to pay for fixed expenses and to generate a profit. The contribution margin concept is useful for deciding whether to allow a lower price in special pricing situations. If the contribution margin at a particular price point is excessively low or negative, it would be unwise to continue selling a product at that price.

A company’s operating profit is the difference between gross profit and total operating expenses. Non-operating items, such as interest and taxes, are below the operating income line. The net income from continuing operations is the operating income minus non-operating items. The final section lists extraordinary items, such as flood damage, and the bottom line is the net income or loss for the period. The contribution margin is computed by using a contribution income statement, a management accounting version of the income statement that has been reformatted to group together a business’s fixed and variable costs.

The Best Accounting Software of 2020

Total Fixed Costs$ 96,101Net Operating Income$ 62,581The Beta Company’s contribution margin for the year was 34 percent. This means that, for every dollar of sales, after the costs that were directly related to the sales were subtracted, 34 cents remained to contribute toward paying for the indirect (fixed) costs and later for profit. Contribution margin (CM), or dollar contribution per unit, is the selling price per unit minus the variable cost per unit. “Contribution” represents the portion of sales revenue that is not consumed by variable costs and so contributes to the coverage of fixed costs. This concept is one of the key building blocks of break-even analysis.

It is also useful for determining the profits that will arise from various sales levels (see the example). Further, the concept can be used to decide which of several products to sell if they use a common bottleneck resource, so that the product with the highest contribution margin is given preference. If you’re an owner or CEO of a small or mid-sized business, in order to have your fingers on the pulse of your business’s financials, and closely manage the bookkeeping and accounting, you need actionable financial intelligence. Outsourcing to a professional team that provided management accounting is essential to your business’s success and growth. The contribution margin is the revenue remaining after subtracting the variable costs involved in producing a product.

The ratio is calculated by dividing the contribution margin (sales minus all variable expenses) by sales. This margin calculator will be your best friend if you want to find out an item’s revenue, assuming you know its cost and your desired profit margin percentage. In general, your profit margin determines how healthy your company is – with low margins you’re dancing on thin ice and any change for the worse may result in big trouble. High profit margins mean there’s a lot of room for errors and bad luck. Keep reading to find out how to find your profit margin and what is the gross margin formula. 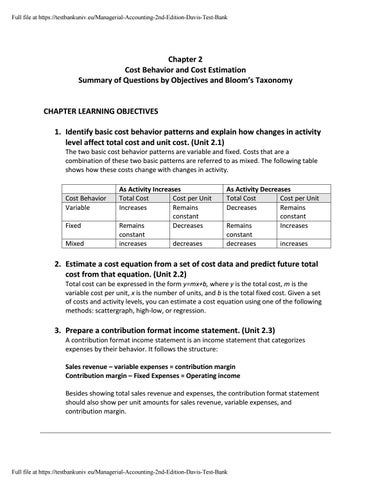 Calculating the contribution margin allows you to see how much revenue each product earns. The traditional income statement format uses absorption or full costing, in which variable and fixed manufacturing costs are part of the inventory costs and, thus, part of the cost of goods sold calculation. The contribution margin format uses variable costing, in which fixed manufacturing costs are part of the overhead costs of the accounting period and are not part of the product costs. The reasoning behind this approach is that because companies incur these fixed costs regardless of the sales volume, they should not be a part of product costs. It also measures whether the product is generating enough revenue to pay for fixed costs and determine the profit it is generating.

The breakeven point is the sales level at which the company covers its fixed expenses and begins to make a profit. It appears that Beta would do well by emphasizing Line C in its product mix. Moreover, the statement indicates that perhaps prices for line A and line B products are too low. This is information that can’t be gleaned from the regular income statements that an accountant routinely draws up each period. Contribution margin is a product’s price minus all associated variable costs, resulting in the incremental profit earned for each unit sold.

Contribution margin per unit is the difference between the price of a product and the sum of the variable costs of one unit of that product. Examples of variable costs are raw materials, direct labor (if such costs vary with sales levels), and sales commissions.

This ratio then explains in percentage form the amount of revenue that is profit and fixed expenses. Due to the relative differences in order size and the efforts that a retailer or distributor have to make, different industries have different typical distribution margins. This ratio indicates the percentage of each sales dollar that is available to cover a company’s fixed expenses and profit.

The next section shows the fixed production and overhead costs, such as building and equipment maintenance costs, insurance and administration. The net income is the difference between the contribution margin and the fixed expenses. Small businesses, including sole proprietorships and partnerships, may use the single-step format, which has two groupings of revenues and expenses. In the multi-step income statement format, the top section shows the gross profit calculation, which is net revenue minus cost of goods sold. The next section lists operating expenses, such as marketing, rent and supplies.

Also known as dollar contribution per unit, the measure indicates how a particular product contributes to the overall profit of the company. It provides one way to show the profit potential of a particular product offered by a company and shows the portion of sales that helps to cover the company’s fixed costs. Any remaining revenue left after covering fixed costs is the profit generated. When calculating an accurate contribution margin, defining your variable costs vs. your fixed costs is essential. 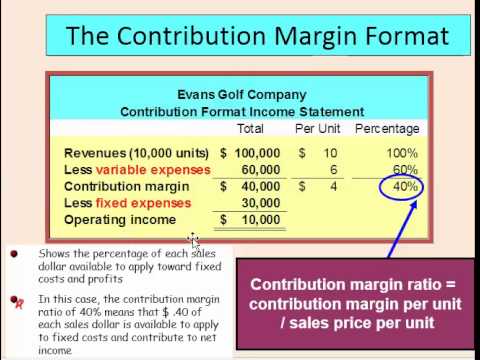 The income statement line for gross profit margin will help you determine and set the specific profit margins for your products and categories of products. If, during a month, you sell $25,000 worth of products and your wholesale cost for those products was $15,000, your gross profit margin was $10,000 or 40 percent. Using this equation, you can create a Contribution Margin Income Statement, which reverses the order of subtracting fixed and variable costs to clearly list the contribution margin. The contribution margin represents the portion of a product’s sales revenue that isn’t used up by variable costs, and so contributes to covering the company’s fixed costs. Fixed costs include all fixed costs, whether they are product costs (overhead) or period costs (selling and administrative).

How do you calculate contribution margin on an income statement?

Gross profit is your income or sales less cost of goods sold (COGS), which are all fixed costs (above the line on your income statement). Contribution margin analyzes sales less variable costs, such as commissions, supplies and other back office expenses (costs listed below the line on the income statement). A traditional income statement shows the gross profit, operating profit and pretax and after-tax net income for an accounting period. Generally accepted accounting principles require companies to use the traditional income statement format for external reporting. The contribution margin format allows stakeholders to determine the breakeven point of individual products or product categories.

In many businesses, the contribution margin will be substantially higher than the gross margin, because such a large proportion of its production costs are fixed, and few of its selling and administrative expenses are variable. The contribution margin ratio is the percentage of difference in a company’s sales and variable expenses. Variable expenses are subtracted from sales to isolate profit and fixed expenses.